Today something changed. I feel like anyone does when they realise their life has become a vague representation of what they hoped it would, only coloured in with the sights, sounds and smells: the details you can never expect.

I rode out of the Carpathians and mounted a final hill climb to bring me back to the Danube. Climbing up the zig-zag bends the bushy landscape quietens as your legs pump away. A few men holding rifles sit in a hut but jump out when I ride past, cheering and pumping fists while eagles that had soared high above become level with my eyesight, their cry is the only sound I hear. 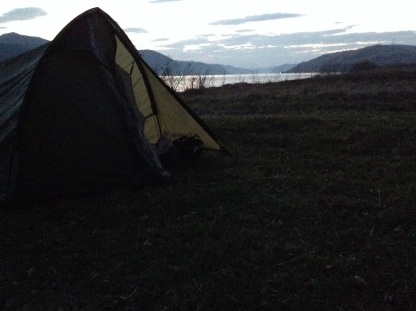 Descending through bushy forests and seeing the Danube river once again reminds me of the journey, the distance travelled as well as Bratislava, where the great vein of water first flowed next to me. And what a great time I had there: the wonderful people I met sending me off with a week’s worth of food, wine bottle and all; my freezing hands while following the river; the role that stretch of water had to play in the city’s story of the second world war: a natural chasm between the guns of Russia and Germany.

The river I now saw divides different mountain ranges and different countries, it no longer washes over the flat plains of Hungary where I left it last. All these things come over me while I look out at this beautiful landscape and yet another country before me, Serbia is on the far shore. Another unknown. The river is somehow familiar after the troubles of Romania. Dogs and bears and tough times in the mountains lay behind me for now at least and I feel once more ‘at home’ on the bike. 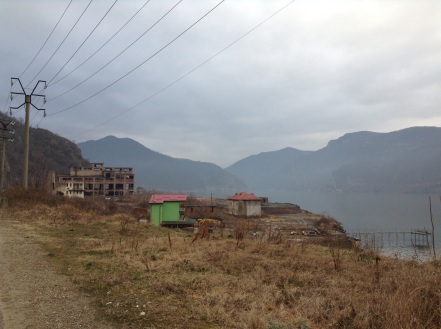 The Danube forms the base of a vast gorge, and rockfalls block sections of road. The Romanian section of this National Park I ride through is called The Iron Gates, whose image is not lost on me, dark granite cliffs and grey scree slopes leading down to the riverside pass on which I travel. Large blocks of bricks and mortar stand derelict and idle, perhaps old quarry buildings or Soviet infrastructure, only adding to the sense of epicness and emptiness of the open scenes of the gorge. Water rushes through streams and rivulets, at times excavating huge valleys through the mountains and the natural beauty overwhelms me. I am touched emotionally too. This vulnerable position I am always in is momentarily revealed and I am thankful I have made it this far safely and the river’s regular companionship wraps me like a hug from a mate. I camp within a few metres of the water and listen to this creature’s waves hit the shore, it will soon be a memory: a nostalgic image to remind me of Europe. I feel at one with nature, with these crashing mountains with the sunset the colours the waves and the winding road along these rocky banks. I am alive.

Through Germany and Sweden I felt like I had been holding the reins to a carriage being carried by some wild beast, a mad horse or a cheetah. In southern Czech Republic I was finally able to camp in relative warmth and sit out having a torch-lit picnic next to a lake and find out how useful my star map would be. I felt like I’d dropped the reins to this crazed beast and could relax, gliding along at a comfortable speed in positive temperatures. It was just that sort of comfort which allowed for the step in to Romania: a land of cattle wandering the road and gate-less railway crossings.

You get used to the bike, to the dangers, to not knowing where you will sleep as anyone gets used to a job: to the responsibilities that end up resting in the hands of an engineer or train driver. Your brain starts to isolate new risks and forget ongoing ones, perhaps it would blow a fuse up there if not. I have been obsessed with dogs or lorries or cold temporarily as they become more serious. Lying in the tent with your iPod waiting to play The Sex Pistols to scare off an adventurous bear in the night. This ride can at times feel like a management of these hazards as you ride through different landscapes, constantly trying to figure out what is currently most life threatening.

I pass through Serbia for less than 24 hours but am moved by the kindness of the people, I find myself being bought petrol for my stove and tanned drivers stopping to help without being asked. More encouraging toots from drivers on the road, spreading their own version of the cheer heard from most sports events. The weather was thawing as I travelled further south and so were the people. ‘The frozen people of the UK and their stern faces hiding an undoubtable sense of humour’: this was the opinion of the people I now passed.

When I arrive in Bulgaria I am lucky enough to find a cash machine in a small village and withdraw what feels like my lifeblood. I find a tiny but essentially stocked village shop and sit drinking coffee and eating something akin to bird food, unsure if muesli is an acceptable meal in this new place. People mill about the shop smiling and saying ‘dobre’, the Slavic word for good. I am clearly something of an anomaly, donned in helmet and luminous jacket, salt crusted on my forehead where the sweat has dried. The shop owner, a lady used to laughing, approaches and calmly wraps a red and white string bracelet over my wrist, ‘Baba Marta’ is a sweet tradition. On the 1st of March the locals wrap the same coloured bracelets around the wrists of friends and strangers, marking the birth of spring. If you’re to see a stork with a red beak you must wrap this bracelet round a tree branch and at times these wooden arms standing in the city parks have thousands of red and white bracelets racked upon them. 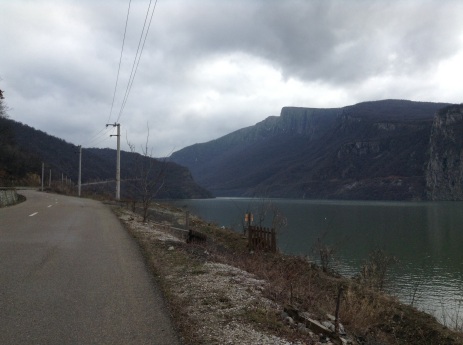 As I cross from Romania to Serbia to Bulgaria I have little currency and as a result eat only a handful of peanuts. I trawl along, watching donkeys overtake me and finally make the Bulgarian border. An experience which has become a staple of the trip: standing in the rain while the border guards ask where I’m headed. China. The double takes, the laughter, the look of smiled surprise from a passing lorry driver. I am used to this now, joke with them and ask what the next word for thank you is: Takk, Danke, Děkuji, D’akujem, Köszönöm, Mulțumesc, Hvala, Blagodarya. A new language and alphabet, a new face on the bank notes, new features among the people and a new set of roads to work out which will kill you. 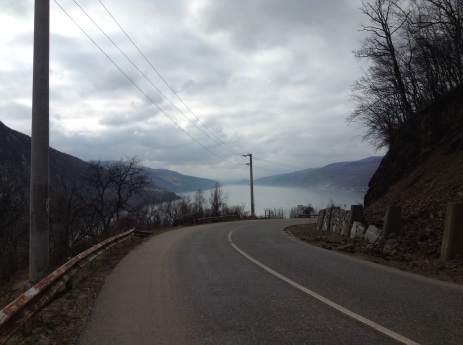