There are a few certainties in life: death, taxes and the impossibility of walking in to a club and immediately attracting the attention of three gorgeous Ukrainian women uninvited. This was the case on our last night in Istanbul, they sat at our table and opened by talking flirtatiously and seemed both amiable and keen to get us on to the dance floor with them.

We had got chatting to a guy who had suggested going to a traditional club, innocently trusting him we made our way across the red-carpet and through mirrored corridors to a dark underground bar. Alarm bells were ringing in my head as soon as peanuts were set down on our table but now that these model-esque girls were trying to charm us the full beacon of ‘scam’ had been lit. This was no ordinary club. I walked in to the toilet to speak to Josh, my cycling partner. ‘This isn’t legit’ I said. ‘I know I’m putting all my money in my shoe’, was his response.

Our host, if you can call him that, experienced none of the spectacular lack of selective criteria the girls we sat with employed. And as a result he repelled not one but two women from our company. Even if he did brandish a face as unsymmetrical, short of actual deformity, as he did we would still have expected the girls to humour him. But they did not. Which led to further suspicions from Josh and myself

When we got back to the table drinks had already been bought and we were told they were not expensive. After some time we made eye signals and got ready to leave, our snake of a guide slipping out to get the ‘bill’ and there we are standing at the entrance opposite the club owner being asked for 2000 Lira (£500), an extortionate price for Turkey. Even this manager seemed pretty vexed at his stealthy club rep, for this dumb personification of a skid-mark had probably brought the two most penniless tourists in Istanbul to the bar, a couple of cycle tourers living off noodles and the classic nutella and bread combo. We paid what we had, a mere fraction of what they asked for, and walked out of there quickly, both prepared to run.

These conflicts have been known to go astray and end in no safe way. At the beginning of our week we had met a couple of British guys who were chased out of a club with a hammer after a similar experience. It seems that the strays weren’t the most dangerous dogs to watch out for in Istanbul. One thing was clear. It was time to leave, and the simple life of the road where the Turks would show warm hospitality was a prospect of great appeal. We both now had fire in the feet to get back on two wheels. 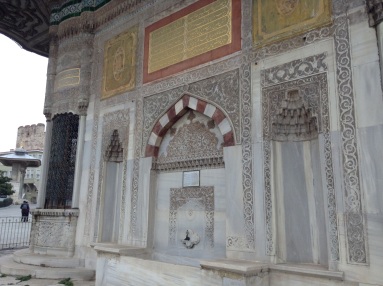 I don’t want to put a bad spin on Istanbul, this could have happened in any major city, and it is indeed the hospitable nature of the Turkish people that perhaps made it so easy to trust another with a hidden motive. 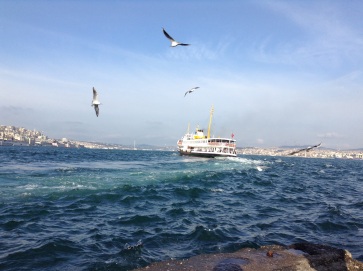 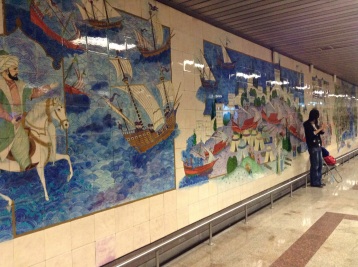 During our time we had spent days meeting a host of great people: a cyclo-journalist full of empathy for our trip and the love-hate relationship with the bike, he had written a book about his mountain bike voyage across the length of the Rockies, the longest such race in the world; a local journalist keen to get a story for a Turkish daily, passionately talking of the complex political story unfolding in her country; a charming literary agent with a knowledge of the best bars through couchsurfing; and Brits with more than a wealth of travel experience and mental stories. 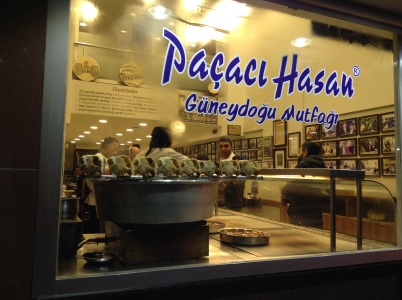 The cosmopolitan city had delivered: hours sitting in the calm atmosphere of mosques, beautiful Arabic inscriptions intermingling with the blue floral paintwork of the interior domes hanging loftily over the prayer hall; the swaying of tea sellers in the Grand Bazaar as they carry their silver trays of rose-shaped glasses of chai between throngs of tourists; the energetic rhythm of the gipsy band as the female lead singer laments that one man is not enough but seven will do to the backdrop of clarinet, accordion and the midnight chime.

I sit within a park at a fountain in the more traditional Fatih district: three couples of middle-aged men sit by me on three benches while the water cascades in it’s central stone bowl. Despite their varying dress code from suits to paint-glittered decorating gear they all sit discreetly shuffling prayer beads in the palm of their hands, sliding the fingers from one bead to the next as they speak to each other.

We set off and head for the plateau that is Turkey, hospitality reigns and we are delighted by the Turkish people as often as we find a Turkish town. On our second day a van pulls over in front of us twice and as Josh is lining up the appropriate volley of reprimands out steps a beaming treasure of a man apparently more pleased to see us than most of our own family would be. He was definitely a two-handed handshake kind of gent, very earnestly happy and enthusiastic about our cycle trip to China as he asks loudly what we are doing. We followed his beaming smile as he walked round to the boot and opened it to find hundreds of bottles inside. He hands us what we think is honey and some shampoo ‘All completely natural ingredients. You need energy!’ He says and points to my legs. I rub my belly in confirmation and he laughs, wildly patting it too.

On the same day we are looking for a campsite as dusk prepares to fall. We approach a couple of farmers in a tractor and ask if they would recommend camping in a disused barn, ‘no you must not’, they say, ‘follow me’.

We do and end up on a construction site, large metallic chicken feed containers have been erected for the flood of chickens soon to enter this farm-in-the-making. The owner of the farm approaches us, the brother of the tractor driver, and tells us ‘Because you are foreigners you can stay. If you were Turkish…’ We are delighted and set up the tents in a large breeze block warehouse. 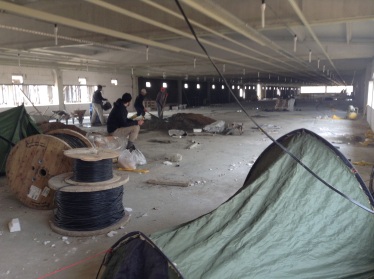 As we wake in the morning builders are mixing cement with spades and setting fire to the packet to warm their early morning frosted fingers, asking if we want anything. I draw a hacksaw on the palm of my hand for some bike repairs but the search for one fizzles after repeated attempts by these workmen.

None can speak English but it doesn’t stop them asking us if we would like some chai. We sit among nine workmen on as many breeze blocks around a long and low wooden table to take part in a tradition that must be as ancient as it is universal. Tea is poured from the kettle to each of us and a box of sugar cubes are handed out. Some guys have the rose-shaped glasses, some not and the banter is clearly being handed round in thick spadefuls. The son of one man is talking the most English, and when he says a few phrases his dad pats him on the back and makes a joke in Turkish, to which the son suddenly spits out his mouthful of tea all over the table and a hysterical laugh resounds among our hosts.

The Turkish hospitality was certainly making it’s mark on two tired riders, we could not pass through a town without being bought something by a local: tea, Turkish delight, some coffee, often without a word being said by them but a ‘bon appetite’. Every driver that passed us tooted in encouragement and people everywhere waved and smiled a ‘merhaba’ (hello). We had met up safely, the boys were on the road, our introduction to Turkey was complete and life was good. 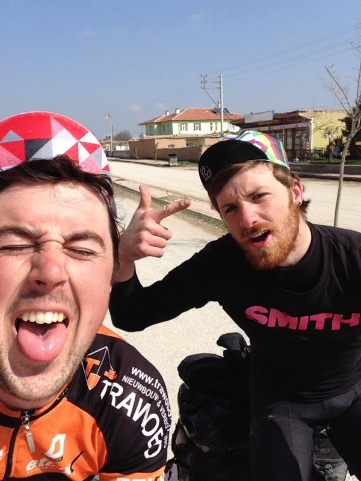