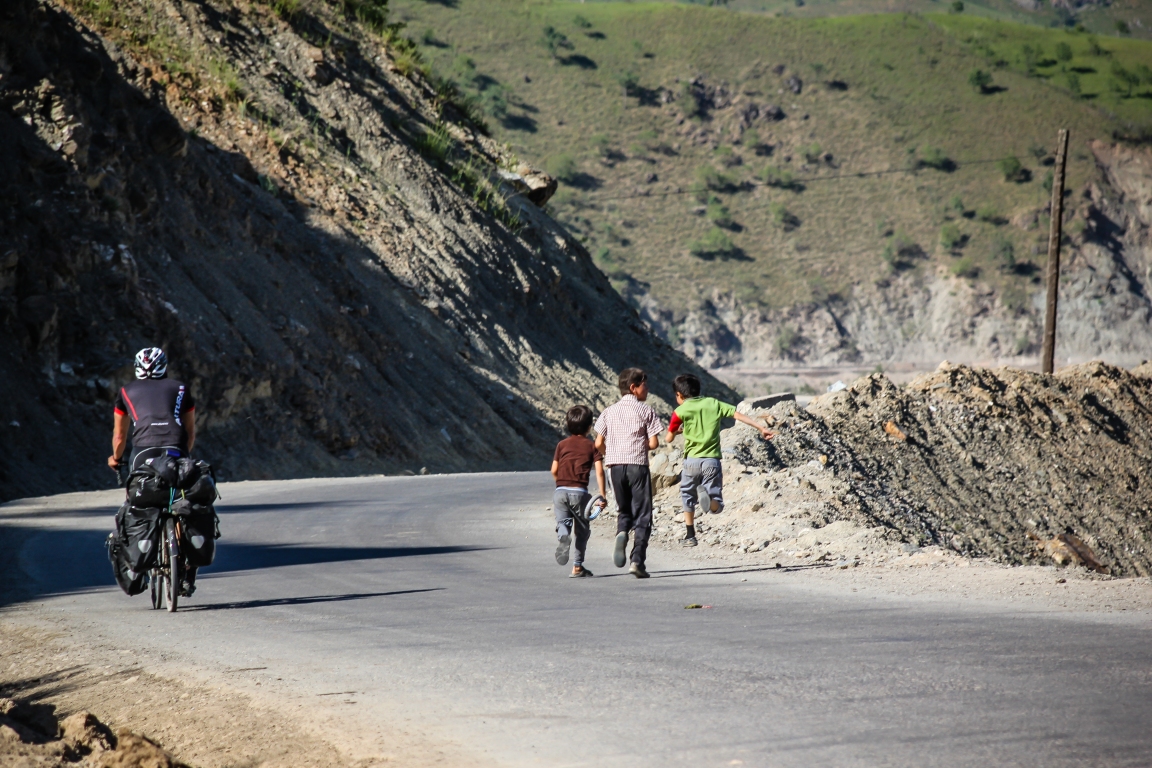 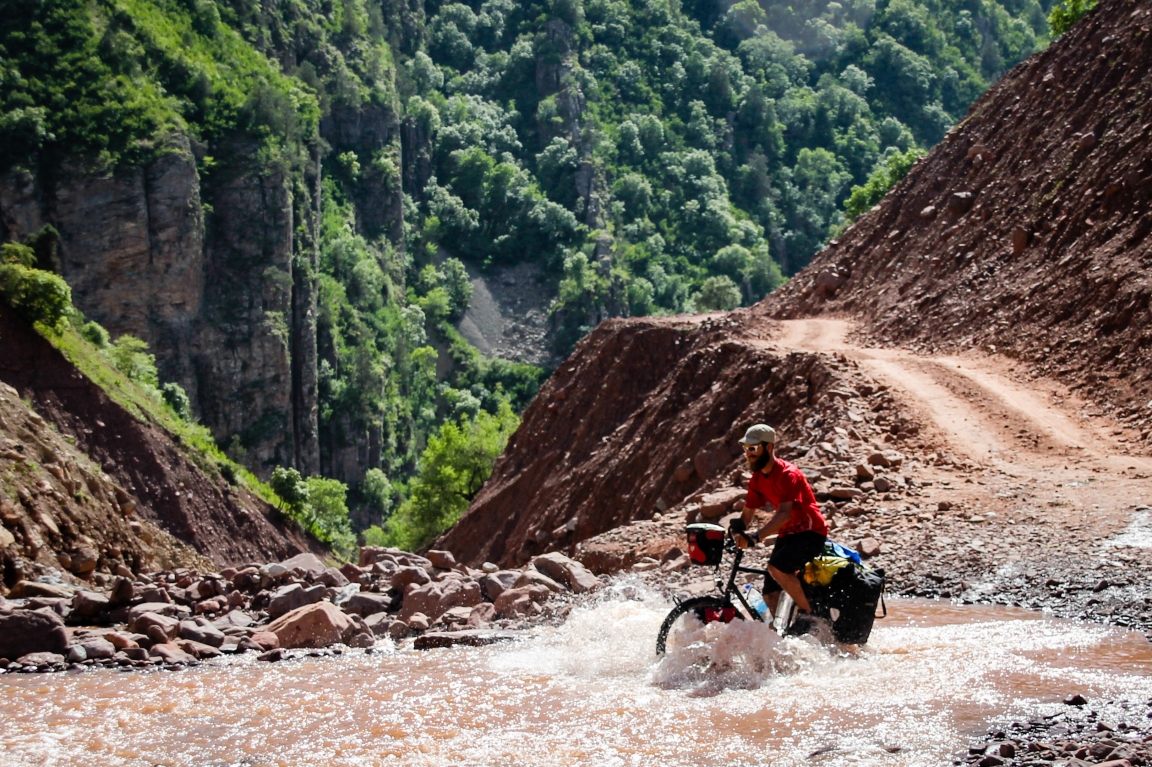 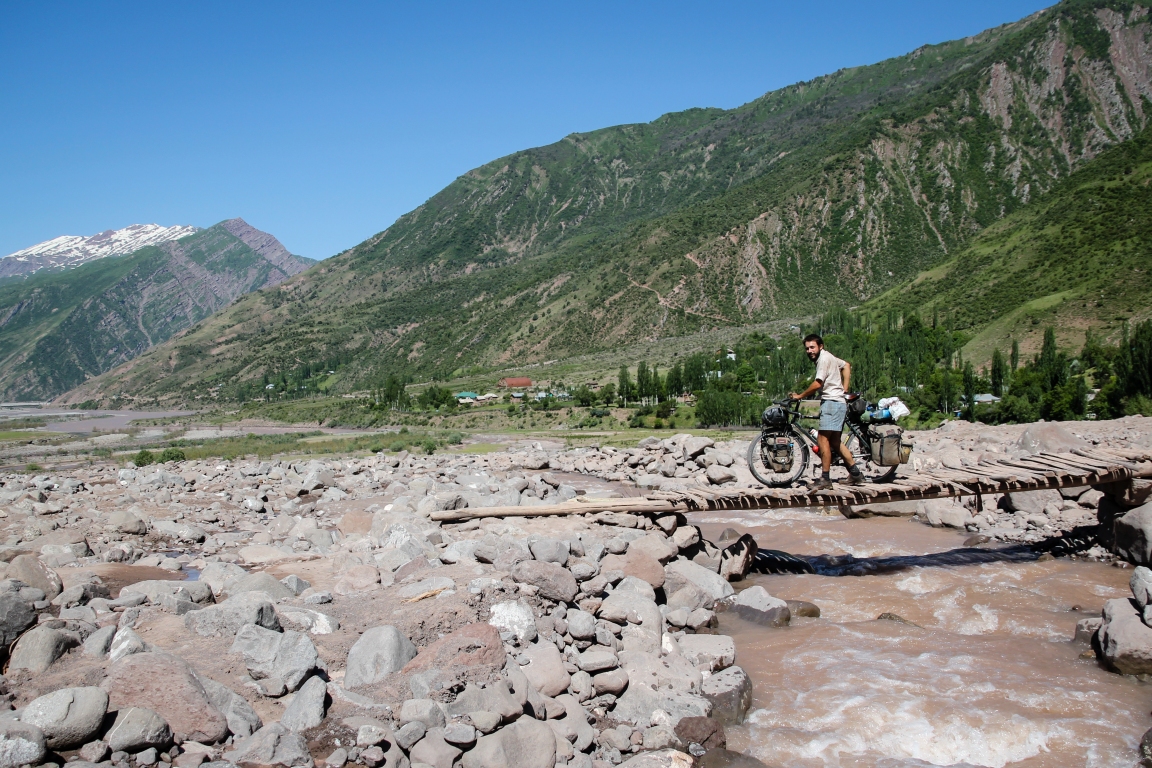 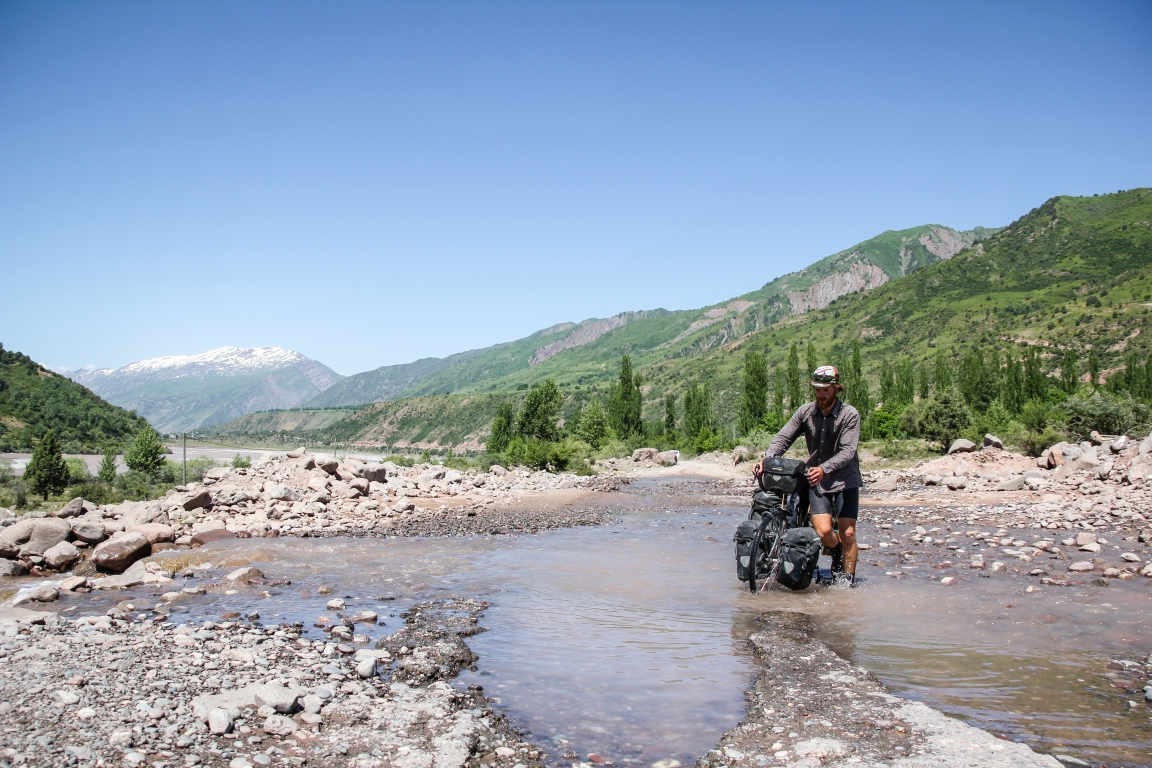 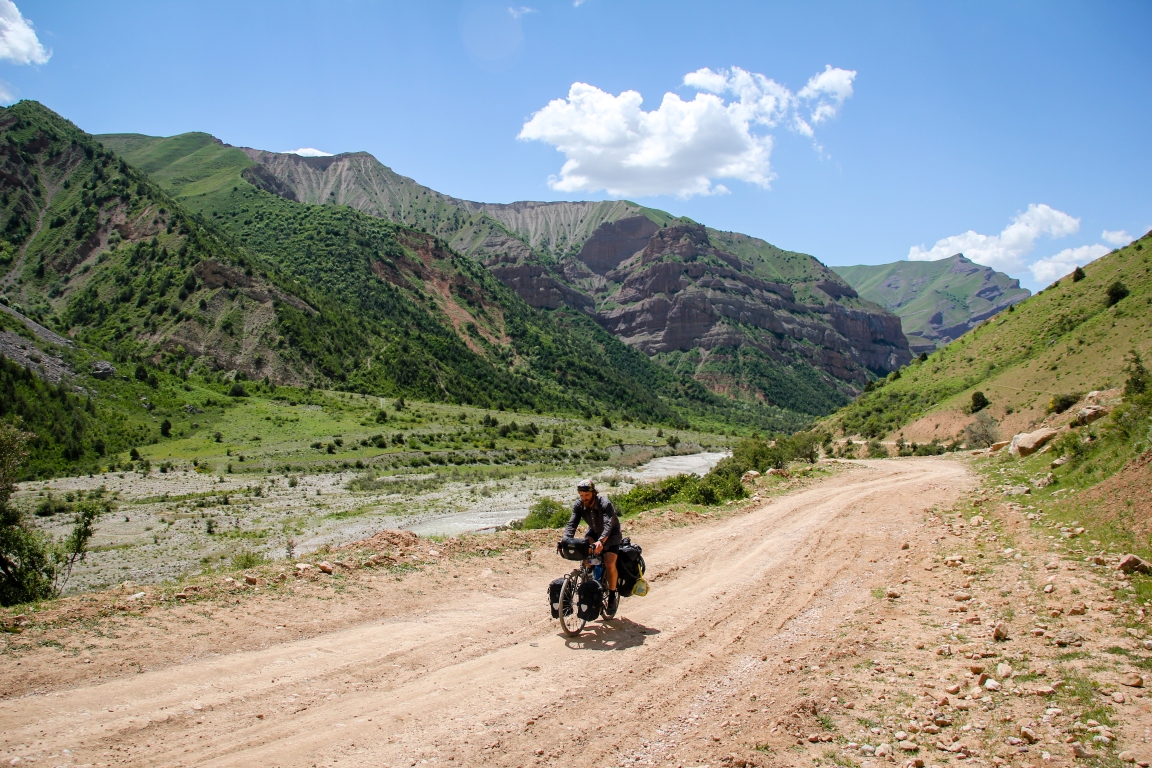 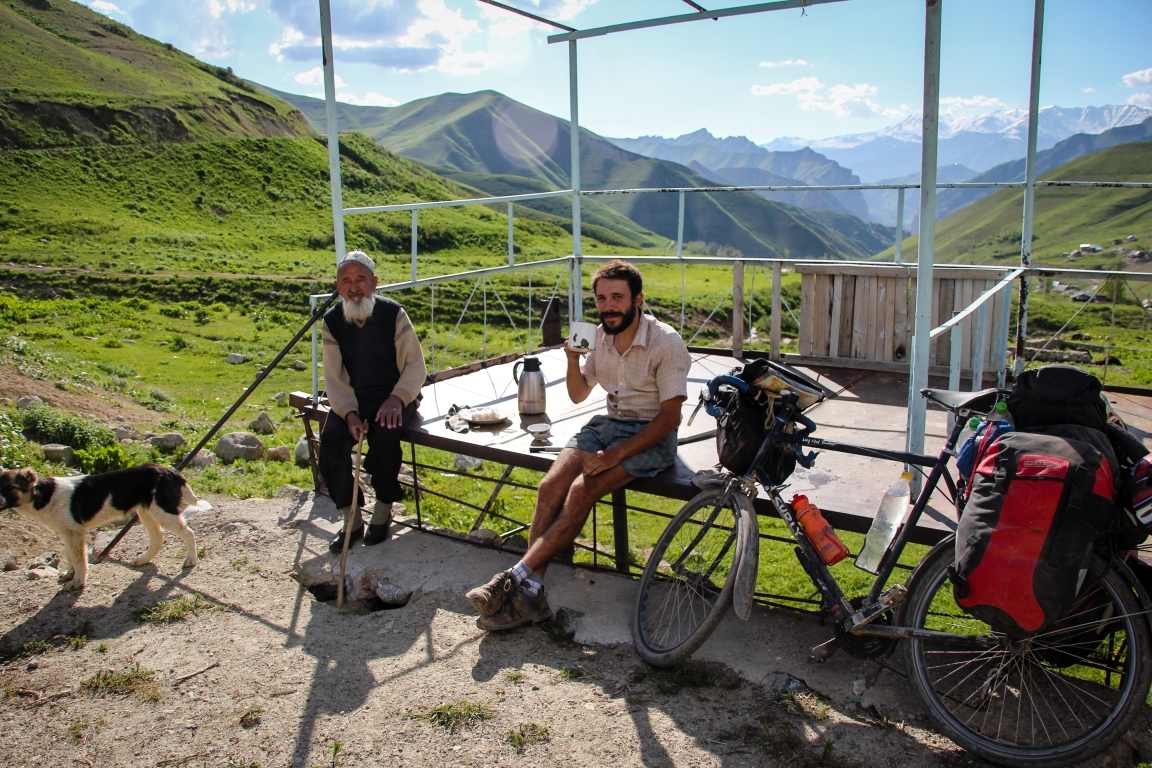 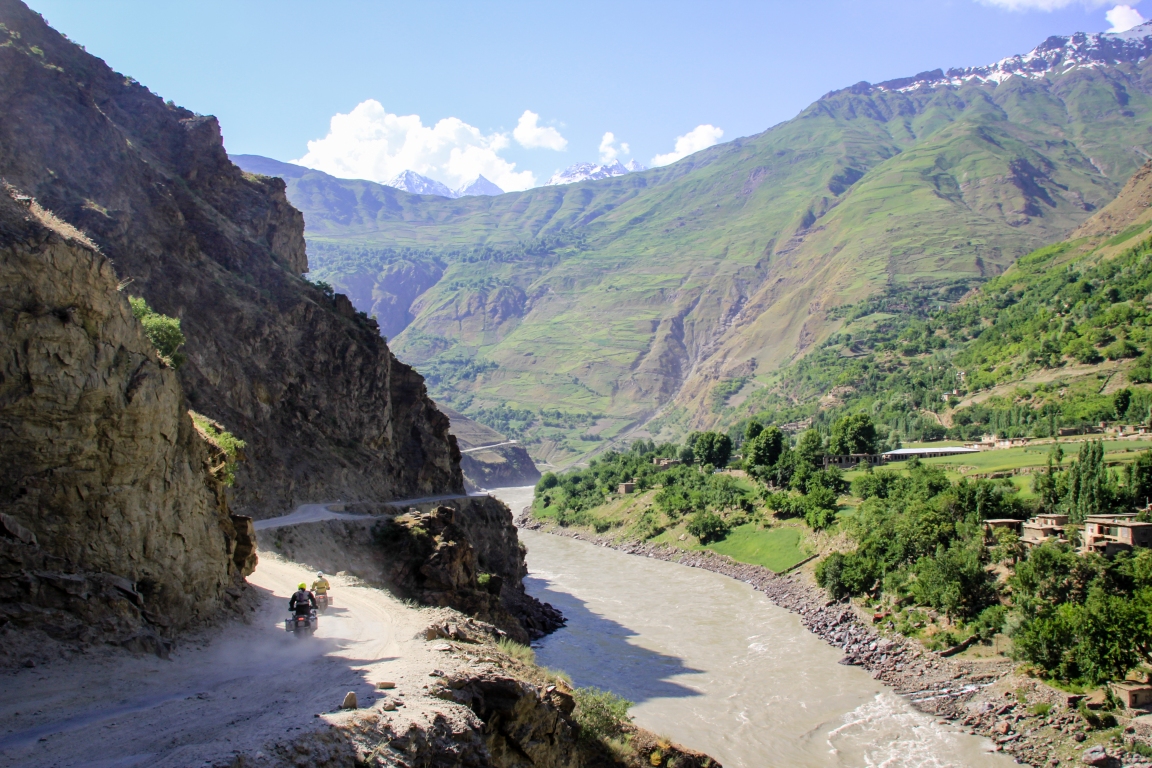 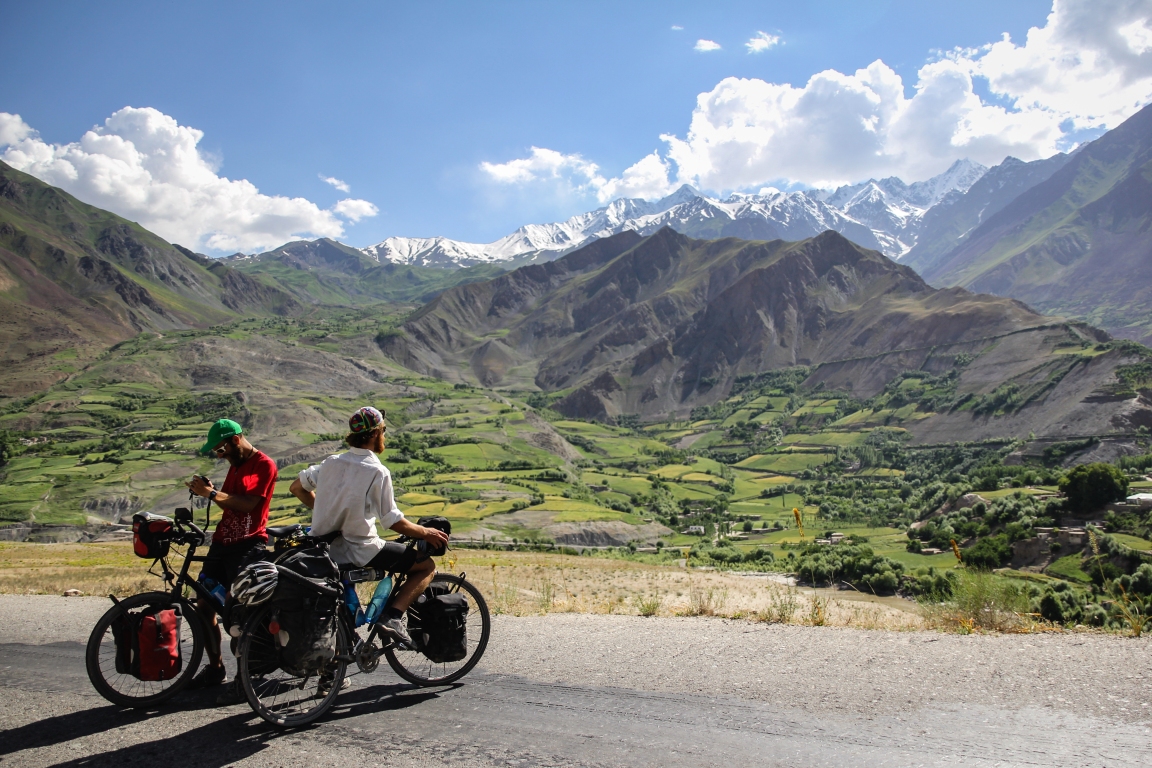 We enter the Pamirs along the ‘Northern road’, infamous for it’s rocky track of a road and 3200m pass. If the government spent as much on the road as they do on billboards of their president they might have paved roads throughout the Pamirs. Alas, they did not and the road turned from tarmac to gravel to a bed of shingle stones. This at first seemed both frustrating and uncomfortable but in fact was a blessing in disguise, the challenge was laid out. Finally the Pamirs were here in full force and this mountain bike style terrain was both exciting and stimulating, thoughts of the straight and endless tarmac road of the desert left behind.

The most level part of the road happens to be that strip lining the precipice drop to the crashing waters below, your heart races as the smaller rocks your speeding tyres push aside tumble over the edge. “I have Chopin’s ‘Funeral March’ playing in my head” Jonny exclaims as he rounds another bend in the road.
Josh, my riding partner since Istanbul, had stayed in Dushanbe to collect his Indian visa and I was now riding with another good friend, Pete, who had flown out to meet us in Dushanbe. The three of us had gone on our first tour together and had kept that tradition since. We were joined by Dave and Jonny, cyclists we met in Dushanbe.
Riding in to the mountains gave way instantly to lush green alpine valleys reminiscent of Switzerland; nighttime storms passing over our flimsy metal shelter at the side of the road and the gradual emergence of the red rock corridor lining the river, gorges cut by waterfalls, the road yielding to the occasional mountain stream.
After a couple of tough days in pursuit Josh joined us in time to throw ourselves over the pass. Rocky terrain dented our perseverance as well as our tyres and we made a sharp unplanned camp at the top of the pass as the sun dipped below the jagged horizon of white peaks.
As darkness fell the few dots of light an imperceptible distance below in the valley were the only specks of civilisation made known to us. The only utterance upon this empty roof of silence the feral howling of gales swivelling through the ridges and slopes of the surrounding hills.
The morning delivered a steep rockfall-strewn descent of this pass, a feeling of free fall, plummeting through the crevasses and gorges trying to slow, to resist the pull of fun in the name of self-preservation. Blisters form on the hands as you cling to the brakes and handlebars, pulling your body back from the cascading drop of a waterfall at the track’s edge. This pass finally lead to the Panj, a river we follow until we met a village in the evening light.
From one near-death experience to the next, the villagers were in commotion as we stopped for some biscuits and kept motioning that there will be an explosion on the Afghan side of the river, they were building a road. They motioned to us to move further up their road, I am told that a tree will be sufficient cover and wait there.
With all the villagers seeking refuge 100m up the road the explosions start, bigger clouds of dust propelled in to the air, louder booms echoing from the valley walls and greater masses of rocks erupting from the dynamite base until they are raining upon us. I jump under said tree and then run up the road with a panicked Pete and Josh who also stayed behind to take photos. All the village laugh through shocked Russian statements then continue on their way, brushing the fallen smashed rocks aside.
Boy shepherds wave on the Afghan side of the river, they are closer than my own riding partners, but sadly more than a river separates us, recent conflicts provoked Russian and other Stan countries to send troops to Tajikistan, we passed a tank with it’s gun aimed over the river.

The distant feeling for those we saw on that side of the river was palpable: this diverse and fascinating country, eternally a natural fortress to history’s great empires, only metres away and yet it’s wonders obscured by the reputation of the Taliban and closed borders along the river. People raced the dirt track on motorbikes and played football by the river, clearly vibrant, if less developed than it’s Tajik counterparts. Afghanistan’s castellated majesty clear,  the opposite shore of the river lined by sheer bouldered walls interspersed with villages made of stone-lined animal pens and stone huts, dwellings that merge with the great shards of rock behind them.

I’ve been on the road nearly five months, and the trip is starting to take it’s toll. The miles tick by. The constant transience of places and people; the feeling of a need to work (in the traditional sense); spending ten hours per day among the sounds of traffic on the roadside; the repetitive questions that are answered sometimes twenty times per day. But small things make up for it. Waking to the sound of the fierce rushing of the river you swam in the night before, falling asleep to the stars shining brightly above; the birds wake with you and sing in to the morning from their perches below the shelves of rock soaring above us, and no matter how many times you’re asked where you’re from those features don’t change.