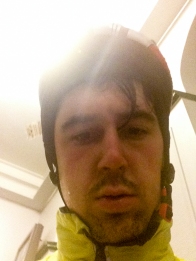 The hardest day of the five month trip. This is the only picture I have of that day: riding in to a headwind and driving rain for 150km along a fast Swedish main road. When I arrived at Halmstad at 8pm my host had already texted me saying ‘I hope you survived the storm’ 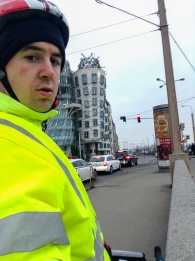 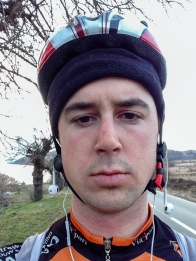 First time I could take my jacket off, the first day I felt the onset of Spring 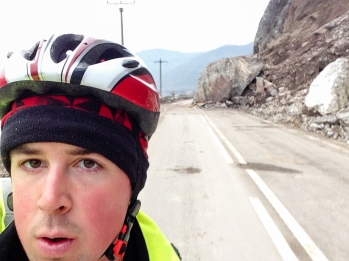 Romanian roads were dangerous for more than one reason. Here, a rockfall has covered one of the lanes 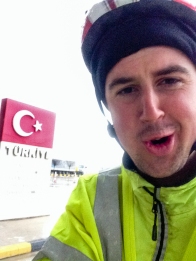 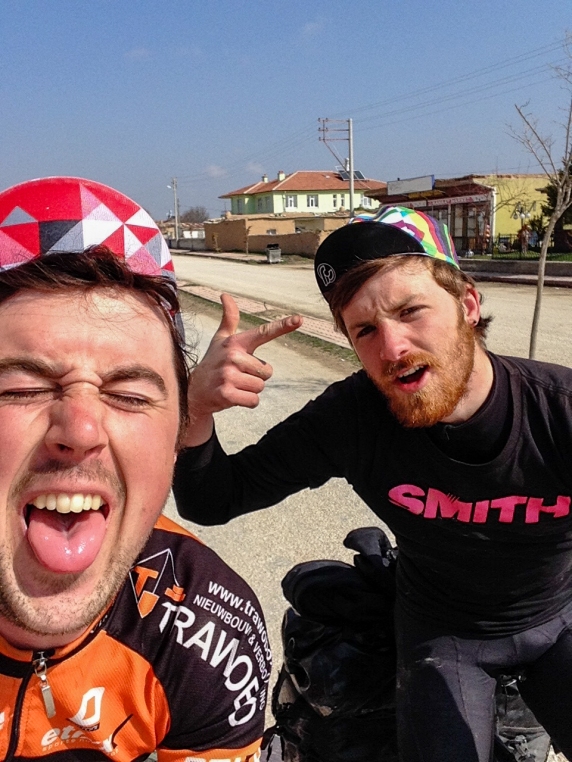 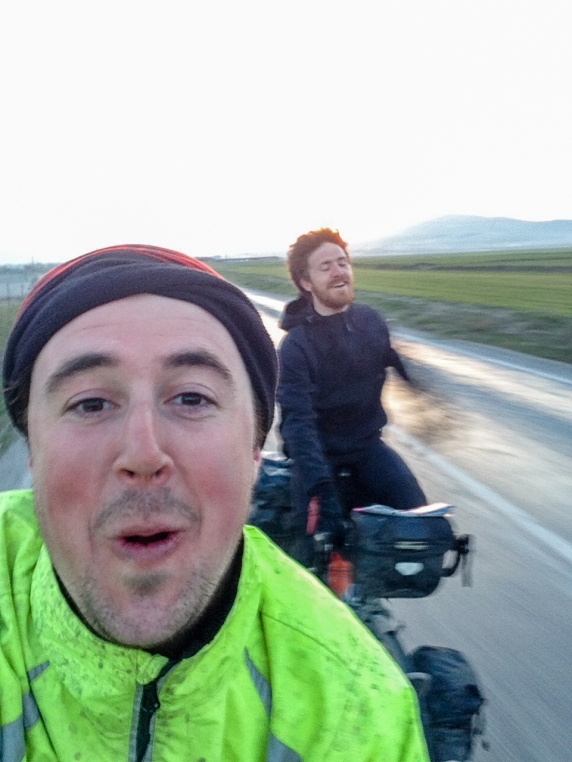 Life on the steppe 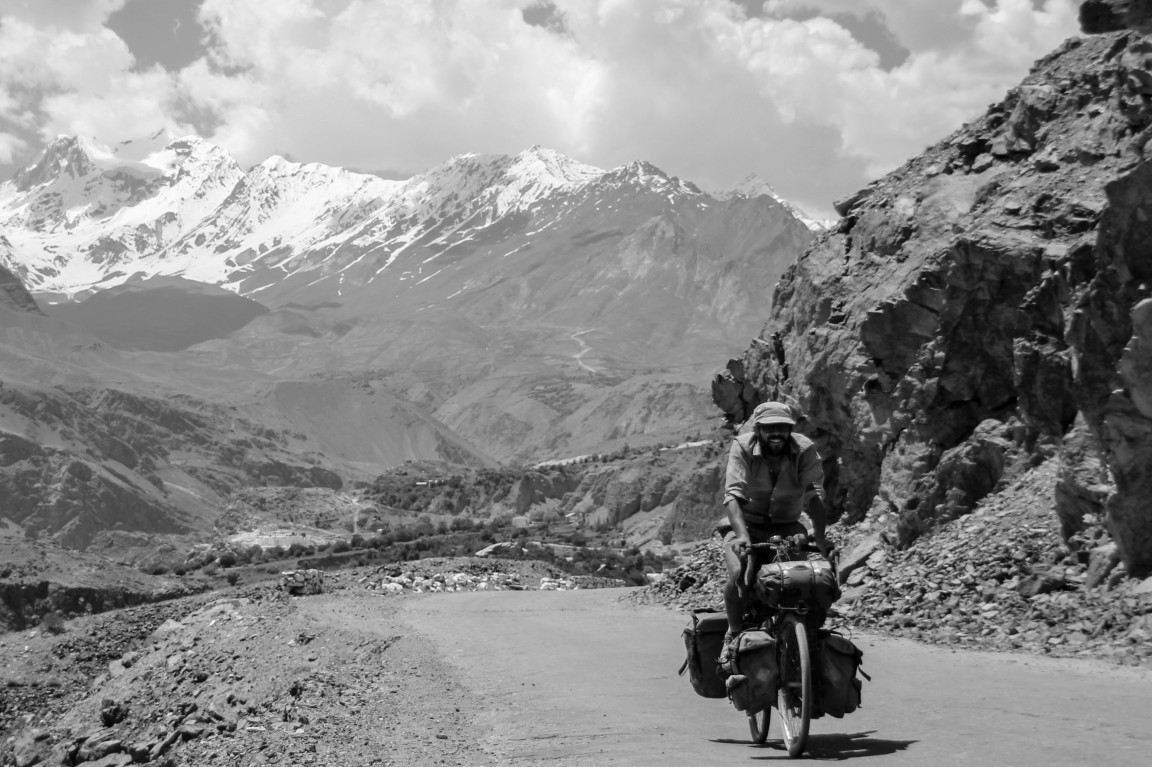 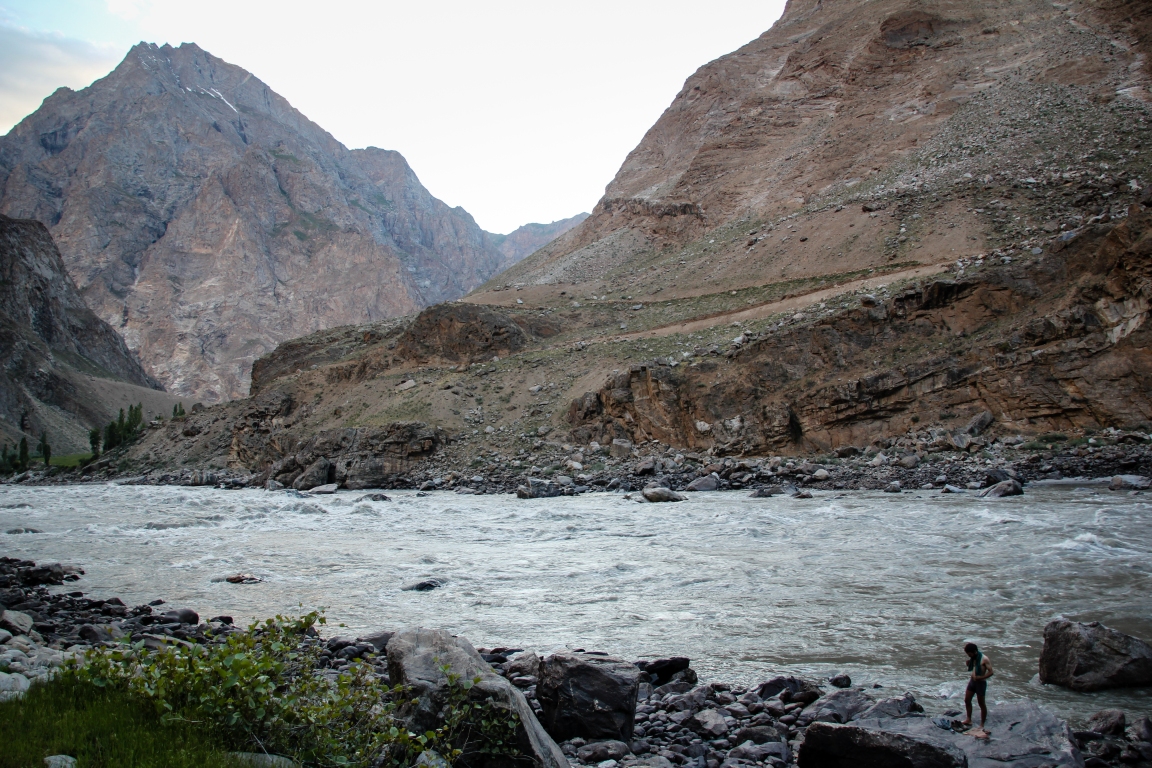 So that was that. Trip over. Now a few words to try and convince any readers that we don’t just spend all our time swearing at insects and polluting the kitchens of hospitable locals with the smells of over-worn socks. Another day another dollar. That phrase echoes through my mind. I haven’t earned a dollar in months, but the rewards of a trip like this aren’t financial.

In the beginning its all excitement, fear and pain. In the middle it’s laughter, confidence and honing of the skills: the bike mechanics for example. And as the trip progresses there’s less fear and excitement and more comfort and weariness, indifference to the transience, seeing things very objectively.

Sweden was brutal. Harder than anything to come. Even the Pamirs: going over 4300m passes having not seen tarmac in days, sand and rough stones sapping your energy. In winter the cold is a persistent enemy. It never gives up. But those first hard weeks made everything else sweeter. Always, you could look back and say ‘well at least it’s not…’. It’s strange now to think I started the trip with apprehension; it now feels as though I’ve been doing this forever.

While we’ve been away friends will have built things in their lives: relationships, careers. Things tangible and worthwhile. I have no qualification or work experience to tout from this long bike ride. No tangible result. And yet it will no doubt change the rest of my life, I feel I’ve learnt more during this trip than in three years of university lectures. Maybe I just didn’t pay enough attention in said lectures but experiences on this trip haven’t been skin deep. They have been direct. The trip is one long problem-solving exercise. When you’re in the snow and you need a solution to erect your (very shit) tent, you’re driven by the most primal instincts.

And when you live with these instincts for six months practical resourcefulness is paramount. I have been less in touch with nature and more concerned about where I will sleep among it; less harbouring a spirit of ‘inner-peace’ and more keen to exterminate the mosquitoes in my tent. If there’s been any change in my outlook it’s been that my attitude is one of ruthless practicality.

Having said that we have seen so much kindness that it can’t help but rub off. You see the world is largely a place of decency amid survival. Not the hostile mass out there reported in the news. And this kindness fuels you on the trip, it ferments great morale in the difficult moments. In every country I’ve been to I’ve been predominantly more likely to be handed a cheerful drink than put in harms way.

There is also something very humbling about travelling by bike. Wherever you are in the world, a bicycle is a very affordable possession, it brings people together, making most local travel possible where it had not been. People relate to a bike, there is no pretence in it, the design is purely functional. This means that as you roll in to town people feel they can talk to you, feel you are one of them. Especially in Central Asia where tourism is scarce, relying heavily on cyclists, the people on the street often know you have travelled a great distance under your own steam. And as many people in the world feel they also have a load to bear under their own steam, you are perceived as a character of interest and openness, no more or less than anyone else.

If anyone has the inclination to do a trip like this, I couldn’t recommend it more. It’s life at the raw end, whole days pass where I’ve felt utter hatred towards my bike, to the point of kicking it whilst riding; other days all is harmony and you’re answerable to no one, you have complete choice over where you sleep. Many mornings waking not knowing where I was. Many evenings passed wondering if I would be found in my tent.

I got used to change. I have become indifferent to travel. I miss work. But the bike is your work. The tent is your home. These routines are where your utmost comfort lies. They’re everything to you. There is no greater feeling than finally zipping up the tent in its wild setting with sweat caked on to your skin from a day in the saddle.

I don’t know how to finish this blog. But I’m assured by my mother that an idea will come to me while I clean the windowsills, the most recent on the list of jobs since I got home.