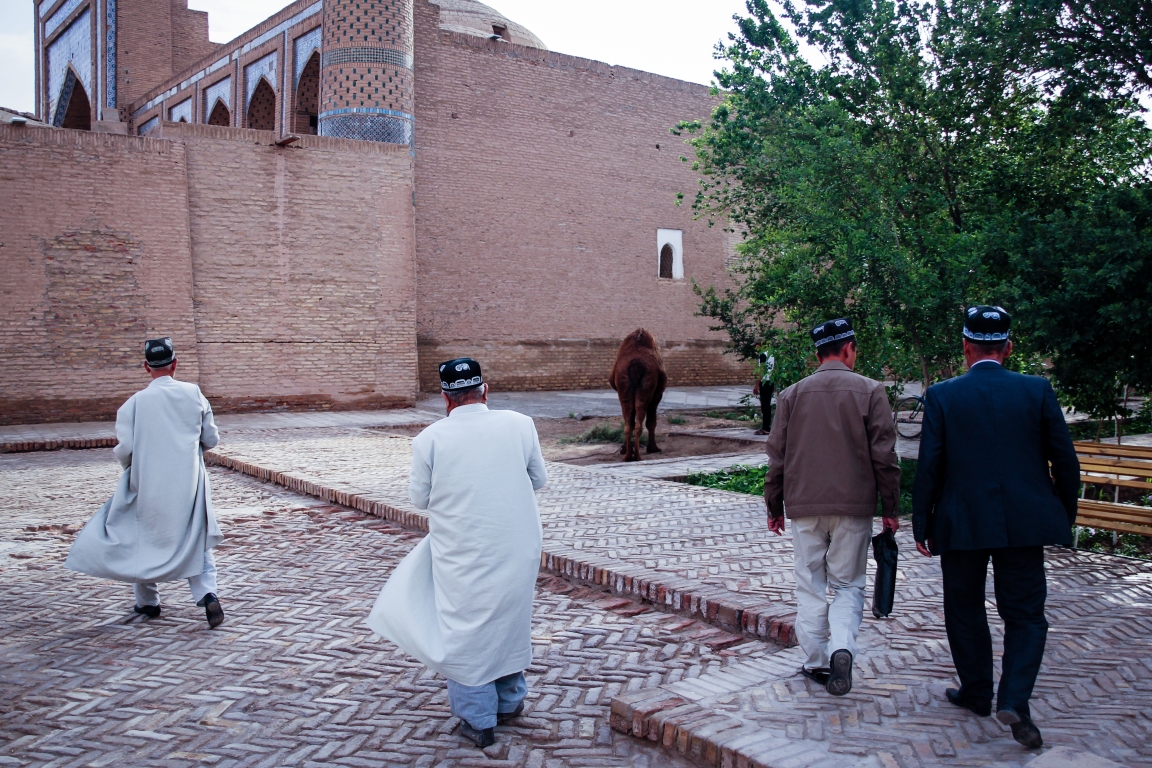 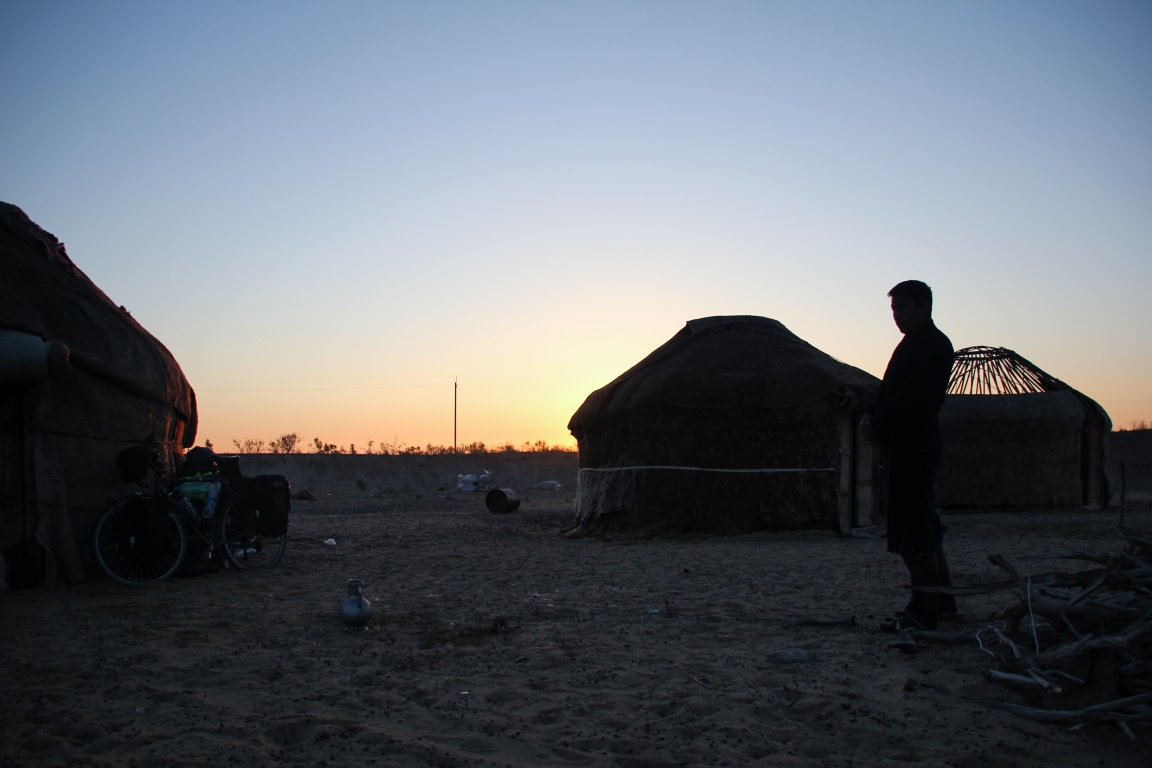 The nothingness previously described in posts repeated itself through the first section of Uzbekistan, but fear not, Josh and I had ample opportunity to postpone the inevitable onset of boredom by tackling the important global questions: “Would you rather wake up patting Ainsley Harriot’s bald head or stroking Antony Worrall Thompson’s furry beard?”

A question inspired by a couple, Kirsty and Marcus, we met on the road who stayed with some Uzbeks, only to wake up and find they were massaging Kirsty’s feet in the middle of the night. These questions interrupted the standard fare of breakfast chat challenging each other to sing the lyrics of Dr. Dre’s ‘Still Dre’ to the tune of ‘If you Wanna be my Lover’ by the Spice Girls, giving some healthy abuse or an extremely rare note of incredulous praise

Another way in which we have passed the time was in awaiting the UK election results: making a bet on who would win. The election results had been announced but being stuck in the Uzbek desert we had no way of discovering them. If I won Josh would have to perform a naked jog along the road at a time of his choosing, if Josh won I would have to ask the next tea house lady for a kiss. Unfortunately I won the bet, so it would be Josh to perform his dare. But the dual obstacles of increasing population density and the ever growing pronouncement of his cyclist tan lines will no doubt make it more and more difficult for him to choose an appropriate stretch of road. He has 3 days left. If there was ever a cliffhanger for the next post…

Uzbekistan is the first country in which I’ve felt rude had I not open any interaction by a shake of the hand. Nothing happens anywhere without a handshake or wave with the immobile hand placed on the heart.

We took a bus ride off our route to Moynaq, a town on the rapidly diminished Aral Sea. Moynaq was a coastal town relying on it’s waters for fishing and other industries. Now, however, a young Moynaqite angrily exclaimed that the shore was 289 km away, a result of diverted irrigation. We took a bus off our route North to see the ghostly and rusting ships on the forgotten coastline, taking a rare but welcome immersing dip in to Uzbek culture, something we felt bike touring sometimes lacked by the need to be so doggedly self-sufficient. We brought a 6 litre dromedary water sack on the crammed bus and soon everyone wanted to experience the novelty of drinking from it, holding up the bladder-shaped canvas bag for an elder lady while she sat on a sofa-sized bag of potatoes.

While we rode back from Moynaq in the early hours of the morning the driver of our 6-man bus suddenly stopped on a fairly remote stretch of road, the minibus came to a halt and the music turned off. Everyone (except us) in the bus stoked the monetary embers of their pockets for notes and managed to bring out some small change. There were no words exchanged. The driver collected these notes, opened his side door and walked across the road to sit next to a man wearing a hat and sat on top of a blanket placed on the grass verge. The seated man was holding his hands out openly and reciting some sort of prayer at which the people in the bus raised their hands in mimicry, then the seated man on the rug held his hands over his face as though washing it with invisible water and the people in our bus did the very same. When everyone had performed this ritual the rug-seated man remained silent and the driver then got up from the rug and walked back to the bus, got in and spoke not another word about it. The music was turned on and the engine revved. That was that.

Uzbekistan is a Muslim country, before arriving we had heard that it was a ‘military state’, ruled by a dictatorship and that the officials were corrupt and unfair. If this is true it doesn’t stretch down to the lower rungs of society. We stop to buy pasta in a shop, but get accosted by the owner who has just laid the table for lunch, of course we can’t leave without being feasted. Unlike Turkey the religious presence is more of an undercurrent: no calls to prayer, the rare sighting of a mosque, frequent declarations of the benefits of vodka. When we stop for lunch in a chai hana a group of middle-aged suited men say a prayer before starting their meal, which is eaten sat on a raised platform covered in rugs, the table simply a plastic sheet covering the middle of the platform.

We flirted with the border of the desert, entering the oasis stretch surrounding the Amudarya, a river leading in to Khiva, an ancient khanate paramount to Russian and British military politics of the 19th century. This stretch was fertile and well cultivated, flat fields being worked by men and women in traditional dress, stopping for a few moments in the tree-shadowed shade of the field’s edge.

After Khiva we headed back in to the desert. One night, as the road got darker, we spotted three yurts set 100m from the road. We dropped the bikes and approached, “par Ruski snayesh?” (Do you know Russian?) I asked. We had heard that some remote people this far out might not speak Russian, but the father knew it well and was more than happy for us to put our tents up within their camp. When we began to unpack he motioned that we could sleep in their yurt. His name was Misha and he worked in St. Petersburg part of the year, migrating between different spots in the yurt throughout the rest, moving in order to feed their one thousand sheep.

There were three women, two older men, Misha, a teenage boy, and about six children who stood about laughing hysterically when we took photos of them and showed the result. Misha was accommodating, speaking Russian slow enough for us to understand. We removed our stove and began to cook some pasta and they stood round discussing our cooking arrangement “chef Josh!” Misha exclaimed repeatedly.

When it was time to sleep space was made for us and we lay down in one yurt with three other blokes including Misha, as well as his wife and two children. Two of the yurts were covered in sheepskins, the third displayed the wooden cage-like structure that lay hidden under the wool of the other two, this third in the process of being built. In the roof of the one we slept in there was an opening and as we lay down to sleep the sheepskins were lifted around our heads allowing us to catch glimpses of the starry night sky beyond the bushy desert floor outside. Blankets and cushions surrounded the edge of the yurt and it was remarkably comfortable bundled up with the whole family, the older man snoring was nudged part way through the night.

Now, to my mind, there is only one condition upon which drinking vodka before 7am is acceptable, and that’s if you haven’t yet been to sleep. So when one of the older men started pouring out bowls of vodka with a breakfast of soup and bread, my intestines gave a rumble of dismay to echo the splashing of the clear liquid in to these porcelain bowls. The cause for this elder’s speech impediment the previous evening had become clear. One advantage of using bowls is that the contents of the bottle are demolished quicker and we could get back to the flavourless delights of green tea. Inside the yurt were wooden dresser tables holding chocolate spread pots filled with food and utensils; heavily-patterned embroidered rugs decorated the floor and a telephone lay on the edge of the cloth serving as a table. The telephone wire leading outside to a single multi-pronged aerial, and became a centre of attention during breakfast as our hosts chatted emphatically and Misha refused his share of the vod, instead choosing to tickle and play with his son who lay wrapped in a bundle on the floor.

On one stretch of remote desert we saw huge dust clouds in the distance and could feel and hear the tremendous short sharp booms that could only mean one thing. We asked someone standing on the roadside, ‘They are searching for gas’ using dynamite to do so.

The money in Uzbekistan is baffling. The highest note set at the value of about 30p. Paying for a cup of tea becomes reminiscent of an import/export salesman in the back streets of Brixton rifling through your stacks hidden in multiple locations about your person, just to pay the bill.

We are now in Bukhara, another beautiful town. Minarets adorned with spherical orbs covered in a turquoise mosaic and richly decorated and intricately carved archways leading to the spacious courtyards of madrasas (old Muslim legal schools).